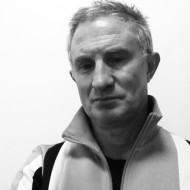 Matthew Shaul is Artistic Director at the University of Hertfordshire Galleries. He is also Director at Departure Lounge – a new contemporary photographic gallery in Luton 50km north of London. Between 1990 and 1993 he worked for three New York museums (MoMA, the Met & Cooper Hewitt) and was one of the first graduates of the Royal College of Art’s curatorial studies program in 1995. His curatorial interest in photography developed in the late 1990s working with David Shrigley and Andy Goldsworthy. He has developed early career exhibitions, commissioning and publishing opportunities with emerging artists from all over the world and numerous projects as major traveling exhibitions. His most prominent curatorial project to-date was ‘Do Not Refreeze’ a major survey of the documentary photography produced in the former East Germany. He has written/edited and published exhibition catalogues for publishers like Dewi Lewis and Passagen Verlag (Germany). The Development of Departure Lounge in Luton is intended to establish a significant new presence for emerging contemporary photographic art in southern England.