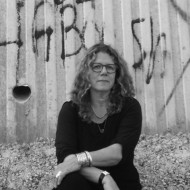 Independent curator and film maker, originally from England, living in Mexico City, makes films which relate to a world of the still image, continue to curate. Works recently with the new museum of photography in Mexico, Foto Museo Cuatro Caminos. Films related to photography include Chevolution, The Mexican Suitcase, The Man Who Saw Too Much, currently in development on a film titled: Witkin & WItkin.

Trisha Ziff is a curator of photography and documentary film maker whose films, focus on the photographic image. A Guggenheim scholar, her exhibitions have been seen at major international museums including: Victoria & Albert Museum, London; California Museum of Photography, international Center for Photography New York and Centro de la Imagen Mexico City. Her exhibitions have looked at Mexican photography, the event of Bloody Sunday in Ireland, Hidden Truths and the famous image of Che Guevara, by Korda, Guerillero Heroica amongst many others. Currently she is curating an exhibition with CMP, California of the work of Mexican photographer, Maya Goded, “Mexican Women in the Shadows – sex workers, witches and the disappeared”. She is also instrumental in organizing the retrospective of Mexican photographer, Enrique Metinides for 2010 and is collaborating with composer/photographer Michael Nyman on his video and photo works Distractions which will be show in 2010. In Film, Trisha Ziff directed Chevolution, 2008 Magnolia Films, Red Envelope and Fortissimo Films and is currently in pre-production on her next film, LA Maleta Mexicana, the narrative of the recovery of images from the Spanish Civil War which she was personally involved in securing; images by Robert Capa, Chim and Gerda Taro.

Recently she curated a major exhibition with ARTSblock (California Museum of Photography) of Mexican photographer, Maya Goded, “Las Olividadas – the forgotten women” with her images taken over the last ten years, of witches, the disappeared and sex-workers. Similarly she collaborated with Mexican photographer, Enrique Metinides for 2011 Rencontres D’Arles with his retrospective, the 101 Tragedies of Metinides, which will be published as a book with APERTURE in 2012. Her most recent collaboration is with composer/photographer Michael Nyman on his video and photo works CINE OPERA which will open at the Chopo Museum in Mexico City in August 2011. In Film, Trisha Ziff directed Chevolution, 2008 Magnolia Films, Red Envelope and Fortissimo Films and the Mexican Suitcase, La Maleta Mexicana, 212BERLIN and Mallerich Films 2011  which had its gala opening in Arles, the narrative of the recovery of images from the Spanish Civil War which she was personally involved in securing; images by Robert Capa, Chim and Gerda Taro. The film looks at the story of the suitcase, memory and exile – Spain/Mexico.  Currently she is in development on her recent film, PIRATE COPY which looks at the industry of pirateria, the illegal downloading and reproduction of film raising issues of authors rights and copyright on a global scale.