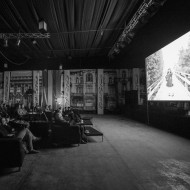 The Grand Prix award programme is focused on individual presentations selected from among projects sent in by photographers.We are happy to announce that jury of Grand Prix 2014 decided to choose 10 finalists whose works will be presented during Fotofestiwal, between 5th and 15th of June 2014. We got 600 applications and the level was remarkably high. The name of the winner will be announced 5th of June 2014, during the opening of Fotofestiwal. Works of 10 finalists will be presented at the exhibition, between 5th and 15th of June, in Lodz.